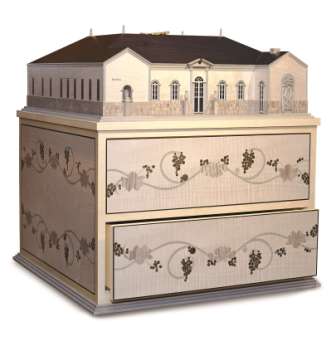 “If a picture tells a story, a piece of furniture speaks volumes about the age in which it was made, the people who commissioned it and eventually used it and those skills that went into its execution.”

David Linley, craftsman of this architectural masterpiece, was commissioned by the dynamic collector, James Stunt to create the quintessential union of the finest wood materials, classic design and artistic vision in an exact replica of Chateau Petrus to house a treasure trove.

Linley employs a balance of traditional and modern techniques, works mostly in wood and is known for imaginative, tasteful contemporary designs. Museum curators and design experts have declared his furniture to be the priceless antiques of the future.

About the Wine Cabinet

The cabinet houses six magnums of the greatest twin vintages of Chateau Petrus; 2009 & 2010, both rated 100 Points by Robert Parker

Billionaire collectors will have about 50 years to debate over which vintage of Petrus turns out better, the 2009 or 2010.

"The harvest at Petrus took place between September 27 and October 12, and the 2010 finished at 14.1% natural alcohol, which is slightly lower than the 2009's 14.5%. The 2010 reminds me somewhat of the pre-1975 vintages of Petrus, a monster-in-the-making, with loads of mulberry, coffee, licorice and black cherry notes with an overlay of enormous amounts of glycerin and depth. Stunningly rich, full-bodied and more tannic and classic than the 2009, this is an awesome Petrus, but probably needs to be forgotten for 8-10 years. It should last at least another 50 or more.

Proprietor Jean Moueix, who I believe is in his late twenties, has taken over for his father, Jean-Francois, who has largely retired, and the younger Moueix has really pushed quality even higher at this renowned estate. Anyone visiting Pomerol would have undoubtedly noticed the renovations at Petrus, as it was once one of the most modest and humble buildings in the appellation. Moreover, I suspect that multi-millionaire/billionaire collectors will have about 50 years to debate over which vintage of Petrus turns out better, the 2009 or 2010. In a perfect world, most people would love to have a few bottles of each, or at least the opportunity to taste them once in a while, as they have become more of a myth than something real, but these wines do, in fact, exist!"

A 1:5 scale model of the chateau, the cabinet is constructed of sycamore, with various fine veneers depicting the roof and other architectural details in three dimensions on all four elevations. It features a portico flanked by two turned urns and recessed arches on each side. The right elevation has an inset gateway with a laser-cut stainless steel gate. The lower elevation, which opens via a push catch, has two stacked drawers, imitating a barrel wine cellar and containing six magnum bottles in cradles.

There are two secret compartments; a hidden drawer…The second secret drawer is a humidor for cigars.. The stepped plinth box also has marquetry detail inspired by the timeless and universally recognized Petrus label and logo. The cabinet, which is approximately 23 ½ inches (592 mm) tall and 22 ¼ inches (564 mm) wide, is accompanied by a full set of architectural plans and topped with two 22 Karat gold Linley created keys of St. Peter.

The Wine Merchant is pleased to be the curator of this remarkable heirloom, the modern day equivalent of an original Faberge egg. This cabinet is destined for the most discerning collector.

On display at The Wine Merchant 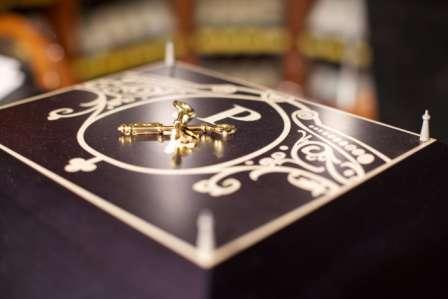 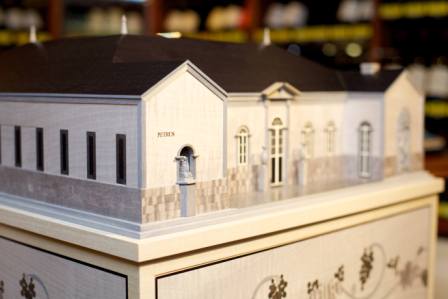 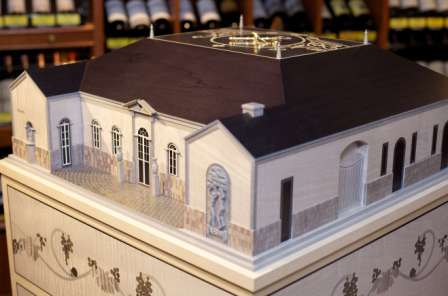 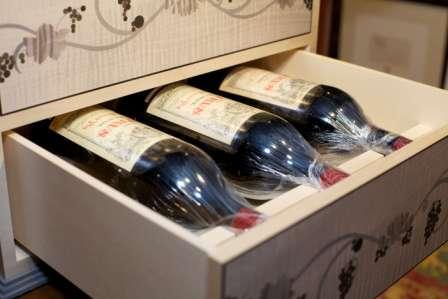 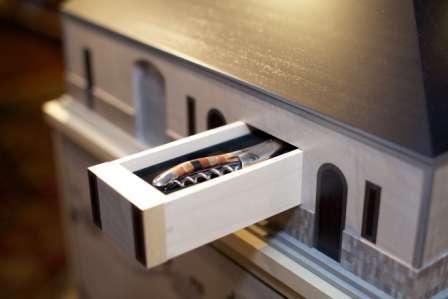